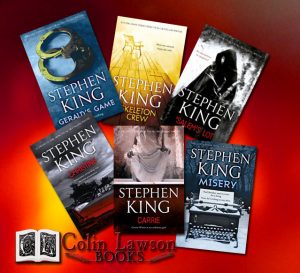 As one of the world’s most widely known horror writers, Stephen King needs little introduction.

Any horror reader will no doubt turn to one of his books early in their reading career.

Many Stephen King novels have been turned into screenplays and movies with varying degrees of success. I would say, even if you’re not the fan of a particular movie it may well be worth giving the original book a try.

I haven’t gone into any kind of review for the books, I’m simply sharing what I found to be some damn good reads.

One final word, this is a personal list and others may not agree with my choices. I’ve made a conscious decision not to simply chose King’s ‘greatest hits’ but selected his books I genuinely enjoyed.

Carrie (1974)
*Book Blurb: Stephen King’s legendary debut, about a teenage outcast and the revenge she enacts on her classmates, is a Classic. CARRIE is the novel which set him on the road to the Number One bestselling author King is today.

Carrie White is no ordinary girl.

Carrie White has the gift of telekinesis.

step towards social acceptance by her high school colleagues.

is forced to exercise her terrible gift on the town that mocks and loathes her .

My Thoughts:
This novel spawned a couple of good screenplays, most notably the 1976 Brian De Palma effort starring Sissy Spacek, but the book brings so much more to the party. If you liked the movies you will love the book.

Salem’s Lot (1975)
*Book Blurb: ’Salem’s Lot is a small New England town with the usual quota of gossips, drinkers, weirdos and respectable folk. Of course there are tales of strange happenings – but not more than in any other town its size.

Ben Mears, a moderately successful writer, returns to the Lot to write a novel based on his early years, and to exorcise the terrors that have haunted him since childhood. The event he witnessed in the house now rented by a new resident. A newcomer with a strange allure. A man who causes Ben some unease as things start to happen: a child disappears, a dog is brutally killed – nothing unusual, except the list starts to grow.

Soon surprise will turn to bewilderment, bewilderment to confusion and finally to terror.

My Thoughts:
I remember the Original 1979 TV mini-series starring David Soul with great fondness and nostalgia. The book is even more entertaining with a lot more detail and content than any TV series could hope to capture – there is so much more to the book than even the excellent TV series captured.

Christine (1983)
*Book Blurb:  ‘This is the story of a lover’s triangle…It was bad from the start. And it got worse in a hurry’. King’s bestselling supernatural tale is about a boy, his girlfriend and a ’58 Plymouth Fury called Christine.

Christine, blood-red, fat, and finned, is twenty. Her promise lies all in her past. Greedy and big, she is Arnie’s obsession, a ’58 Plymouth Fury. Broken down but not finished.

There is still power in her – a frightening power that leaks like sump oil, staining and corrupting. A malign power that corrodes the mind and turns ownership into Possession.

My Thoughts:
Brought to the screen in 1983 by director John Carpenter the movie is rather cheesy but the book is as interesting and suspenseful now than it was back then.

Skeleton Crew (1985)
*Book Blurb: Unrivalled master of suspense Stephen King takes the unsuspecting reader on a fantastic journey through the dark shadows of our innermost fears.

Do the dead sing?

In this bumper collection of chilling tales, we meet: a woman who has never crossed The Reach, the water dividing her from the mainland; a gramma who only wants to hug little George, even after she is dead; an innocent looking toy with sinister powers; and a primeval sea creature with an insatiable appetite.

My Thoughts:
I adore this book of shorter stories. Some great reads in here. My two personal favourites are ‘The Mist’ and ‘Word Processor of the Gods.’

If you’re looking for some ‘bite-sized’ horror reading from a quality author then you could do a lot worse than Skeleton Crew.

Misery Chastain is dead. Paul Sheldon has just killed her – with relief, with joy. Misery has made him rich; she was the heroine of a string of bestsellers. And now he wants to get on to some real writing.

That’s when the car accident happens, and he wakes up in pain in a strange bed. But it isn’t hospital. Annie Wilkes has pulled him from the wreck, brought him to her remote mountain home, splinted and set his mangled legs.

My Thoughts:
The wonderful movie from 1990 starring the unsettling and perfectly cast Kathy Bates has it’s own merits but the original book offers so much more when it comes to suspense, fear and dread.

But this time Jesse didn’t want to play. Lying there, spreadeagled and handcuffed to the bedstead while he’d loomed and drooled over her, she felt angry and humiliated.

So she’d kicked out hard. Aimed to hit him where it hurt.

He wasn’t meant to die, leaving Jesse alone and helpless in a lakeside holiday cabin. Miles from anywhere. No-one to hear her screams.

Alone. Except for the voices in her head that had begun to chatter and argue and sneer.

My Thoughts:
An amazingly unique premise for a full length novel  (perhaps inspired by the earlier Misery novel???) and it works so well. I have never felt so much tension than I experienced while reading Gerald’s Game. The scene where the shackled Jesse attempts to take a much needed drink of water had me turning pages so quickly I had to stop and reread the page before several times – an amazing feat of writing. Wonderful!

Mega Horror Movie Poster Quiz
Want to watch videos offline? I say, try this.
5 Great Reasons I Write Early In The Morning
Is The Pandemic A Hoax?