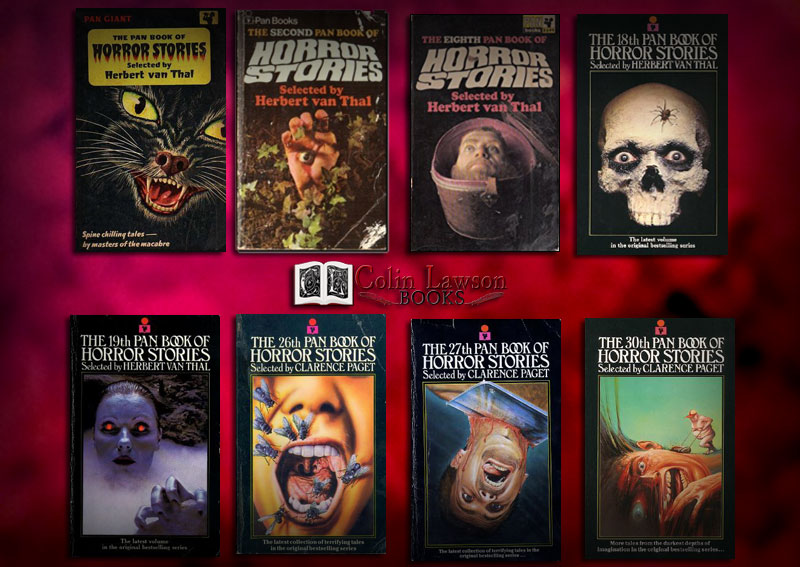 This was a series of paperbacks first published in 1959 and ran until the final volume, volume 30, saw the end of the series in 1989.

The thing that first attracted me to the books was the lurid cover design that would sometimes thrill, occasionally titillate but usually disgust and intrigue. Combine the strong, vivid cover designs together with stories from new authors as well as classic authors and you had a winning combination.

Yes, you sometimes had to read through some less than meritorious writing but you knew that the occasional hidden gem would be found within the pages of each edition.

The books were brought together and edited by Herbert Van Thal until the 26th edition when Clarence Paget took the reins following Van Thal’s death.

Some of the stories included featured works from authors such as Peter Fleming, C S Forester, Ray Bradbury and Bram Stoker.

From around volume nine there was a stronger focus on fresh talent rather than established authors and provided some much needed exposure for new writing talent.

The series became known for raising controversy due to the increasingly violent and gory stories together with more writing leaning more toward the trashy rather than the classical style. As a growing young man this is probably what sparked my initial interest in the series.

As a result of reading the more trashy stories in the 1980s I was inspired to read more in the series and this provided exposure to classic authors and their deeper story-telling in the earlier editions.

Sadly, the lower quality of writing, or possibly a shift from reading horror to watching it on the big screen in the 1980s saw the demise of readership and by the time volume 30 appeared the death knell had been struck for the series. Volume 30 is considered a collector’s piece due to the small print run at the time of publication. At the time I published this post you can pick up a copy of the 30th Pan Book of Horror Stories on Ebay for a little over £70.

Luckily, copies of other books in the series can still be found online for reasonable prices (as little as 99p) so new horror readers and those of us looking for a hit of thrilling nostalgia can still enjoy the Pan Book of Horror Stories without breaking the bank. Be warned though, the used copies found online can vary in condition greatly.

If you can find some copies in serviceable condition I recommend you give them a try – there are some cracking reads to be found within those interesting covers.

Video: The Man Who Made Witchcraft (Pagan Documentary) - WICCA
5 Great Reasons I Write Early In The Morning
Happy New Year 2023
50 Quotes to inspire you and improve your life