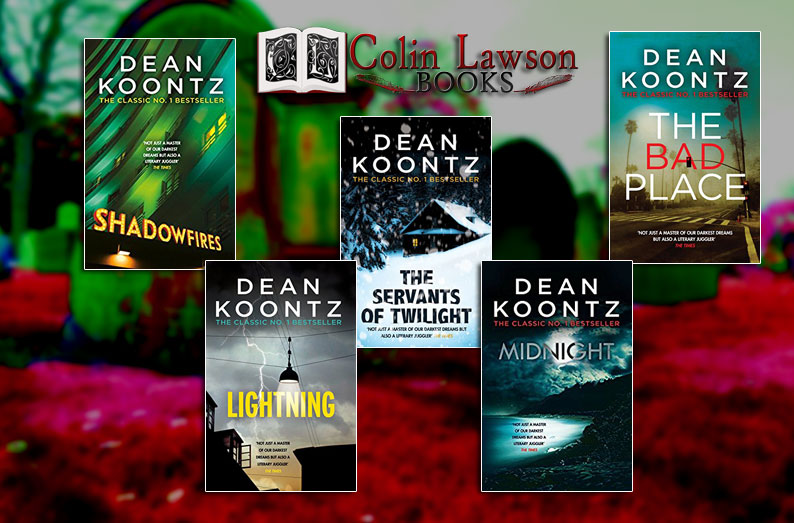 Here I present my favourite five books from Dean Koontz.

As always, these are my personal choices made from books I have personally read and enjoyed: I know not everyone will agree with my choices but that’s what makes reading books such a personal experience.

“Dean Koontz is an American author. His novels are broadly described as suspense thrillers, but also frequently incorporate elements of horror, fantasy, science fiction, mystery, and satire.
Many of his books have appeared on The New York Times Bestseller List, with 14 hardcovers and 14 paperbacks reaching the number-one position.

He has sold over 450 million copies of his work as reported on his official website.”
– Wikipedia

Shadowfires
Unbelievably tense and spine-chilling horror.
*Dean Koontz’s Shadowfires is a thrilling novel of jealousy, danger and the fight for survival. Perfect for fans of Stephen King and Harlan Coben.

Rachael Leben’s violently possessive ex-husband, Eric, hideously mangled in a freak accident, is dead. But his body has disappeared from the city morgue.

Now someone, or something, is watching Rachael. Calling her. Stalking her. And though no one will believe her, she knows who it is; that his walking corpse is a grotesque mockery of life, and his brilliant, warped mind, once again ‘alive’, is seething with jealous rage, seeking an unspeakable revenge.

Lightning
A chilling thriller full of suspense and shocking secrets.

*Lightning is a gripping thriller from Dean Koontz, the master of chilling suspense, that will thrill fans of Richard Laymon and Harlan Coben.

The first time the lightning strikes, Laura Shane is born…

The second time is strikes the terror starts… though eight-year-old Laura is saved by a mysterious stranger from the perverted and deadly intentions of a drug-crazed robber. Throughout her childhood she is plagued by ever more terrifying troubles, and with increasing courage she finds the strength to prevail – even without the intervention of her strange guardian. But, despite her success as a novelist, and her happy family life, Laura cannot shake the certainty that powerful and malignant forces are controlling her destiny.

Then the lightning strikes once more and shatters her world. The adventure – and the terror – have only just begun.

The Servants of Twilight
A dark and compulsive thriller

*A religious cult takes its faith to the extreme…

In The Servants of Twilight by Dean Koontz, a mother must fight unimaginable evil to save her child.

‘Koontz’s skill at edge-of-the-seat writing has improved with each book. He can scare our socks off’ – Boston Herald

To his mother, Joey seems an ordinary six-year-old boy – special to her, but to no one else. To the Servants of Twilight, however, he is an evil presence who must be destroyed – an Anti-Christ who must die.

The terrifying ordeal for Joey and his mother begins in the supermarket car park where an old woman accosts them and pursues them with her terrible threats. Christine’s world is turned into a nightmare of terror. Only her love for her child, and the support of the one man who believes her, gives her the chance to survive the Servants of Twilight.

*What is the dark and terrifying secret that haunts Moonlight Cove?

Midnight is a gripping thriller from bestselling novelist Dean Koontz that explores a town haunted by a deadly presence. Perfect for fans of Stephen King and Harlan Coben.

A string of inexplicable deaths has occurred in the picturesque coastal town of Midnight Cove; sinister, shadowy figures stalk the streets in the dead of night and four people are drawn together by terrifying circumstance: a young woman determined to find the truth behind her sister’s suicide; an undercover federal agent; a child on the run from her parents; and a wheelchair-bound veteran.
As darkness descends, these four must confront the chilling nightmare of Moonlight Cove.

The Bad Place
A gripping horror novel of spine-chilling suspense.

*Dean Koontz’s The Bad Place is a terrifying novel that will chill the blood even as it rends the heart. Perfect for fans of Stephen King and Harlan Coben.

‘This is white-knuckle, hair-curling-on-the-back-of-the-neck reading – as close to actual physical terror as the printed word can deliver’ – Los Angeles Times

Frank Pollard awakens in an alley, knowing nothing but his name and that he is in danger. Over the next few days he develops a fear of sleep because when he wakes he finds blood on his hands, and bizarre and terrifying objects in his pockets. Distraught and desperate, Frank begs husband-and-wife detective team Bobby and Julie Dakota to get to the bottom of his mysterious, amnesiac fugues. It seems a simple job, but they are drawn into ever-darkening realms where they encounter the nightmarish, hate-filled figure stalking Frank. And their lives are threatened, as is that of Julie’s gentle, Down’s-syndrome brother, Thomas.

To Thomas, death is the ‘bad place’ from which there is no return. But as each of them ultimately learns, there are equally bad places in the world of the living, places so steeped in evil that, in contrast, death seems almost to be a relief.